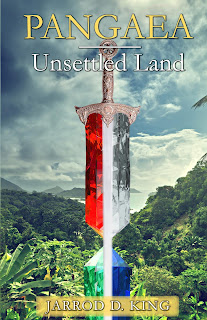 There are a lot of things that make this book awesome.  Plot moves at a fairly decent pace, splashes of humour, a love triangle (who doesn't love those.) and evil villains you can't help but love.  But what really stands out is the opening sequence.  The first few paragraphs are what tells a reader if they should even bother with a book.  This first section was literally only a few paragraphs,, and it definitely won on all accounts.

Set up of all the characters was well done.  You knew who they were, what they were about and could fill in the gaps on things unsaid which is nice.  Gets you personally involved as you read.  No real confusion about the laws of the land, great when creating your own world.  I especially loved that I had no problems with modern technology and magic living in harmony.  Most people go all sci-fi or all fantasy, so it's nice when people just go all or nothing, and it actually works.

The villains.  Seriously they were awesome.  Fantastically wicked in that you almost wished evil might actually win kind of kool.  And the evil queen's sidekick, if evil must have a partner in crime, she definitely fit the bill.  Nothing much to say about these two just perfect.

All the side characters gave the book a nice lift that made you scream why aren't there more of them in this book.  Just a tease really, sigh.  The plot itself was nice.  The three main characters started off somewhere and ended up changed somewhat in the end, all except for one.  Gisela.

Gisela was, to be fair the one I was expecting the most from because of the spectacular opening chapter.  However, I felt she just didn't go.  Even after a certain incident (plot spoiler can't tell you) she was still the same almost uncertain lacklustre person she'd been the whole book.  Such a shame since her ordeal was probably the most intense.  A lot of room to play there.

Slade.  He was okay how could he not be his name is Slade.  Coolness.  Young man trying to find himself, pave his own way, ends up settling for the way paved out for him instead.  It was a journey you could feel yourself falling into--travelling along with.  It moved.  Well done but he didn't quite seem to move in the middle like in the beginning.  At the start he was slowly climbing somewhere, then he found a valley and grazed on some grass for a while, and then zoom total character development circle complete.  Overall, middle included, his arc was well etched out.

And then there's Doug.  What's not to like about Doug.  And when you say his whole name, Douglassaire it's even better.  His story was definitely the most spelt out.  His history, his place in the story itself, how his unknown past lined up eriely with his present, almost like destiny.  The little things placed throughout his story brought a nice cohesiveness to the story.  Made it work and also dropped more knowledge on this fantastical and fantastic world the author created.  I would go as far as to say that the villains, even the one sub-villain and Doug really show what this author is capable of as a writer.  And he's the rough, rugged man type, not relevant but just one more reason to love him, especially when he's topless. (yay to shirtless Doug).

Other than my issue with Gisela, whose name is also beautiful, is the friendship between her and Slade.  I just, even upon reread, can't buy into her not knowing his sexual preference thus making it hard for me to feel for her role in this love triangle.  If she knew, the whole love triangle would've worked still.  Wouldn't be the first time a girl has pined for someone she can't have.  I just never got the sense Slade was hiding it so therefore didn't get how she just didn't know.

And lastly.  The love triangle.  I most certainly was not a fan.  However, it's a bonus for this genre.  It's familiar territory, and something readers of this genre would expect and other than what I just said, it hit all the correct notes.  Played out as it should and in the end... well I can't tell you that, but for this book, it's perfect whether I liked it or not.

So would I recommend this book?  Unrequited love, forbidden romance, magical creatures, amazing villains, action, just the right note of suspense to keep you reading and Doug (yes I love him that much), what more do you need really.  This was a fun, quick read and I'm putting it out into the universe that it deserves a sequal (which is code for more Doug, Douglassaire.)